The painter presents on asa nisi masa an extraxct of some of her series: Family Brooke, Family Thomson I, Family Thomson II, Australian History I, Australian History II. The starting point of her paintings are old pictures, that inspired her because of the subjects’ serious facial expressions, their plastic laying and their faded costumes made by refined decoration and precious cloths.

Christina Thwaites born in England, graduated in 2004 from the University of Edinburgh with an MA in French Literature and History of Art. Whilst living in Paris she attended the Ecole du Louvre and worked as an assistant to watercolourist Patrick Fouilhoux. Her painting skills developed in Italy tutored by artist Alberto Parres at La Porta Blu Studio in Rome. During her stay in Rome she has been involved in several artistic projects and some of her recent works have been shown at Palazzo delle Esposizioni in Rome and the MACRO (Museum of Contemporary Art in Rome).  She confirmed her international career with exhibitions in Milan, Amsterdam, Rotterdam and Sydney. Nowadays Thwaites lives in Canberra, she works from her studio at  ANCA (Australian National Capital Artists) and whilst continuing to exhibit regularly in Italy.

The faces portrayed stare intensely at the spectator. They investigate beyond the frame, as if they would like to know better who is observing them. Sometimes the subjects are family members, letting themselves be portrayed with extreme elegance, aware of their similarities and of the particularity of their clothes. You can perceive their clothes through the detraction of colour; that colour which outline very similar face features. What makes the difference between these almost identical faces is just a pair of glasses or a strange hairstyle.

Sometimes, Christina’s subjects are two little girls, very similar one to each other, standing out on a wide purple background, happy of wearing the same white dresses, proud of their charming blue collar which crashes with the red painted toy dog on wheels, kept jealously on a leash.

Christina Thwaites portrays an elegant world in which essential backgrounds contain sketched figures, that are completed only through the extraordinary precision of meticolously coloured and refined details, defining the spirit of whom is portrayed.

«They are family members – my grandparents and their parents, my uncles, aunts, great aunts, parents, their cousins, the siblings of grandparents etc. The photos I work from go back 3 or 4 generations – they all have familiar and similar faces – all from the same gene pool – only clothes and uniforms give clues for knowing something about their social standing, their jobs, their life styles.»

Starting her work from old family pictures, Christina transposes an old memory, of which she has not taken part, in a contemporary world where the characters portrayed seem to live a new existence.

«Most of the photos I use to paint from, were taken before I was born – they surely represent other people’s memories, even though photos do not always show in their narrative the memories they represent. In the artwork creation process, I am interested in the protagonists of my paintings as it is my way of making them present in my own life, but the paintings themselves usually take on new identities as they are created and I don’t try to control that. There is something universal and nostalgic about old photographs in general – most family albums are full of the same static poses and serious staring faces – the paintings share these elements of style and perhaps arouse memories for others…»

«Lots of things inspire me – it depends where I am and what I am doing – travelling is inspiring – travels abroad or travels at home. I worked for NATO when I left the university, then as a tour leader in Morocco, in China, in Senegal and in the Caribbean. I worked in a prison a couple of years ago in Rieti and I worked on a floating theatre boat with acrobats and singers last year… at the moment I am working with a group of disabled adults in a village near where I live – all these environments inspire me – even though they might not all get painted.»

Even though it is impossible to represent all these experiences, they determine and define Christina’s artwork. For example, this is demonstrated in the strong Expressionism of the background colour spots, in the sober violence of blue and green faces, in the characterizing impersonality of the sketched protagonists’ faces, and in the meticolous details which confirm and proclaim her artwork originality. The background that often occurs in the artist’s family portaits are symbolic, and are made of different wall paper patterns everytime.

«The ‘wall paper’ effect is one solution I use for creating depth and interest in the painting – I use it for colour and compositional reasons. By giving the portraits a sort of abstract background, it makes them more universal and open to interpretation. Sometimes the printed shapes I use, have a symbolic meaning related to the portrait. In a lot of medieval paintings and religious icon paintings a block of colour or a pattern is used to flatten some surfaces so that other parts of the painting (usually the face and hands of the figures) stand out – I use this same technique in my own work to the same effect.»

Found, selected and taken to a new life pictures.

«I like the fact that when I paint from a picture I really study it and I feel like I almost ‘meet’ the person or people in that photo- I come face to face with a past that I am from, but which I was never part of…»

In Christina’s last artworks, settled in the australian air of Camberra, occur a direct intimate meeting with the subject portrayed.

She described to me how this last trip has been a cutural shock, an experience from which she learned a lot. She focused especially on the Australian history, which has influenced her recent artworks themes and atmospheres.

«I tried to capture that aspects as the strong faces and the sad expressions staring at you, typical of the pictures I use as a starting point for several of my pieces. I hope that my portraits could capture part of this sadness and part of this strenght. My pieces protagonists come from pictures found in the archives of the Camberra library. Most of them represent Australian indigenous, photographed by a European settler. Some of them represent “the stolen generation”, that generation of children torn from their parents by the authorities and taken in schools and charity missions in order to uproot them from their cultural background and their own families.»

It is interesting to see how, in addition to the new themes introduced in the last artworks, Christina developed also her style, originally based on the wall paper patterns. In fact, she has moved to a selection of more sandy colours that reflect the earth opaque tonalities, and sometimes flow into a brilliant and frenzied pointillism.

«The paintings made by Australian indigenous have had a strong influence on my work here in Canberra, their use of pattern and their relationship with the earth is fascinating. The use of small dots is very controversial, I started to use objects which I found and their decorations in order to create stamps, which I use for a symbolic and stylistic level.»

The starting point is always a photo, a picture from the past. She studies it, knowing it little by little, until she let it participate to our contemporaneity.

A meeting with a past anything but far. An ancient memory, which lives again in the present. 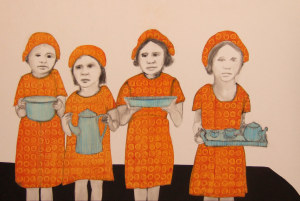 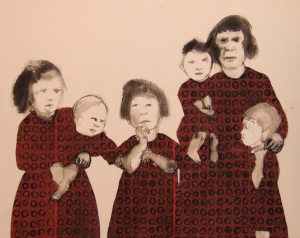 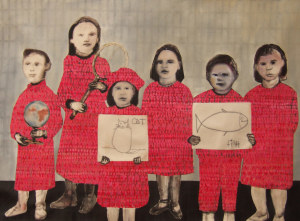 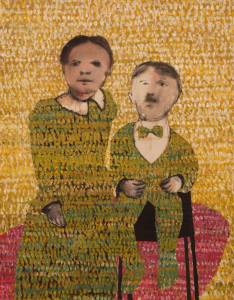 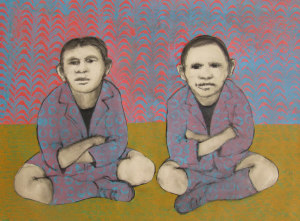 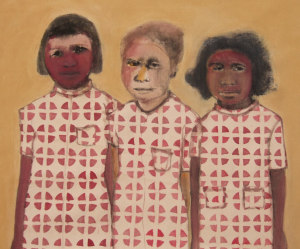 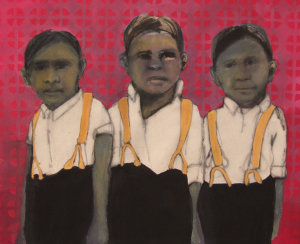 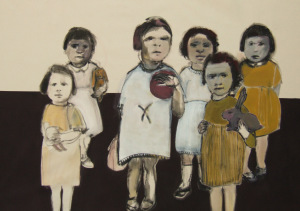 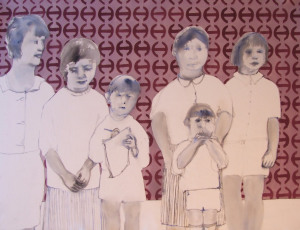 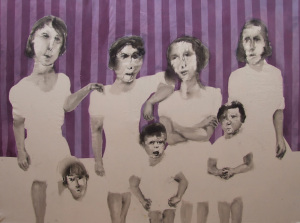 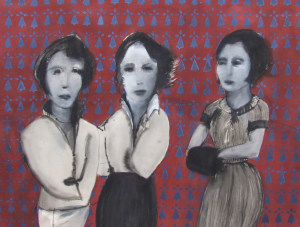 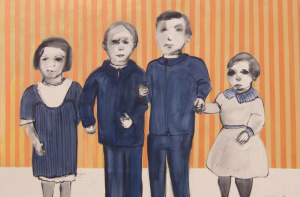 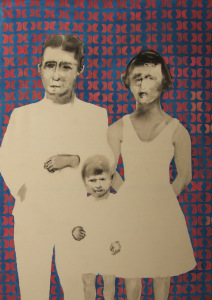 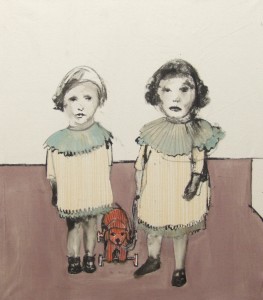 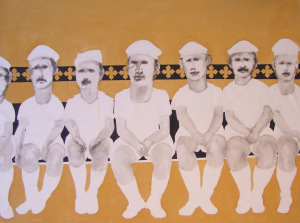 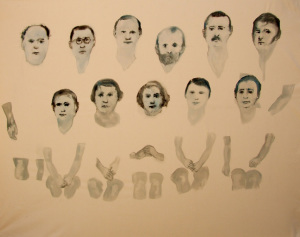 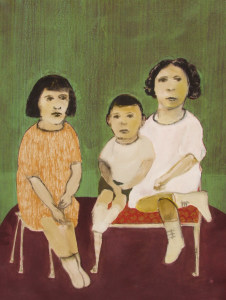 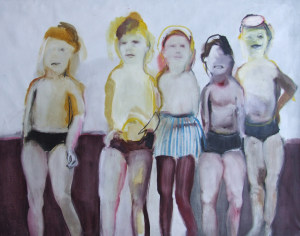 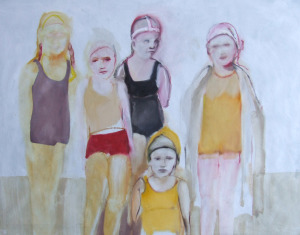 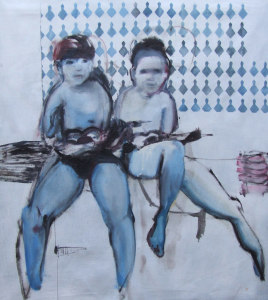